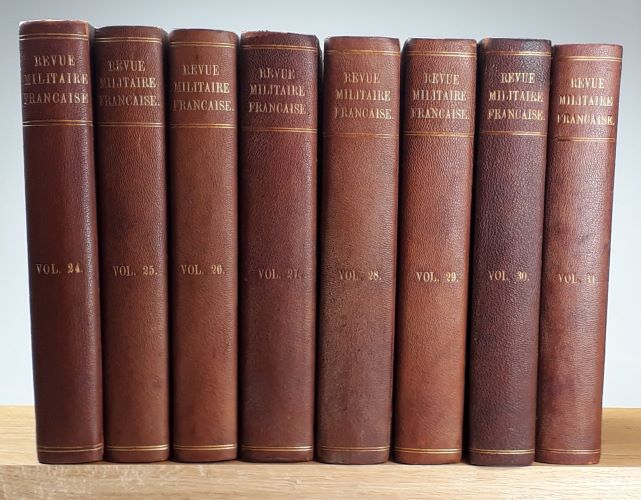 Publie avec le Concours de l'tat-Major de l'Arme. Demy 8vo., 22 cms. Volume 28, 97e Anne, Nouvelle Srie. Avril-Juin 1927, pp 392 and with a number of detailed fold-out battle plans, some tinted, and with similar pagination in the other 7 volumes. Half-bound in brown grained calf, brown cloth sides, speckled edges (some light browning, in part, to endpapers). A good run in good state of this valuable resource, especially on World War I. With the neat ownership signature of [Major] M. R. D. Pannett The Devonshire Regiment, at the head of the front free endpapers. His name is in the Memorial Book of the regiments of Devon and Dorset, The Keep Military Museum, Dorchester. Pannett was shot in the mouth during World War I and fortuitously the shot missed bone. His notes and papers on military matters, dating from 1923 through to 1943, are housed at the Imperial War Museum. Rick, as he was known, married Juliet Somers in 1911 who went on to become the well known portrait artist Juliet Pannett. She painted or drew portraits of such well known figures as Field-Marshal Montgomery, Jean Cocteau and Louis Armstrong, as well as Her Majesty the Queen, members of the royal family and prime ministers. Aptly, her last major commission was a portrait of General Sir John Wilsey, Colonel of the Devon and Dorsets. Eight volumes.

This website uses cookies either for the usage of analytics software, marketing software, and/or to supply social media features.
Read more here.